There are people in the world so hungry that God cannot appear to them, except in the form of bread. 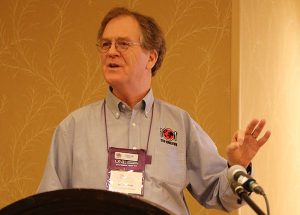 Rev. Steve Hickle shared a vision during his workshop Thursday afternoon titled: Wesley Men: A New Wesleyan 100. As Faith Outreach Director of Stop Hunger Now, he’s working with others to build a movement to end hunger in our lifetime. “We’re going to discover that there is enough food in the world to feed everyone” he said. And his organization has been building coalitions toward that end for the past 10 years.

They’ve engaged nearly two million volunteers in packaging meals over that decade, and have delivered about 275 million meals in that time, distributing them to 1,500 places in over 70 countries. “Every place that receives these meals is a partner of ours and they take a lot of responsibility in getting those meals to where they need to go…  I’m a United Methodist, and I have been acquainted with what is now the Wesley Men’s group” (until recently they were called World Fellowship of Methodist and Uniting Church Men.) They’ve been working side-by-side for 4 years toward this moment. “We’re able to say to the whole Methodist family here in Houston that we can build a Wesleyan movement to end hunger.”

Andy Morris, the Executive Director of Fast, Pray, Give referenced a resolution passed at the World Methodist Conference in 2006 saying we need to fast, pray, and give to end world hunger. “The men’s affiliate took that charge on as something they needed to do and when we started to look at how to achieve those goals we needed a partner.” Stop Hunger Now was the obvious choice. “It was started by a Methodist minister,” Morris continued. “They do a lot of what we need to do to attack the systemic causes of hunger by feeding children in schools so they can learn, can finish their education and earn a better income. They are then able to become self-sustaining. We’re breaking the systemic causes of hunger.” Their organization is now, for the first time, asking people to sign up at fastpraygive.org to help. “Our goal is to reach 5 million Methodists in the next five years.”

Hickle said Fast, Pray, Give “is this remarkable, accessible, grass roots way for many, many, people to be engaged in ways that will enrich their spirits and enrich their sense of how important it is to share food with hungry people. We see a lot of spiritual health and vitality coming out of this as we see people moving beyond their concerns for their own places and stretch around the world.”

Individuals can give directly through fastpraygive.org, but if your church would like to do something hands-on, Stop Hunger Now may be the answer. “We have locations in 21 locations around the U.S. to be able to bring a mobile meal packaging experience to your church,” Hickle continued. “Anything within 2 hours of our many locations is doable. If it’s further than that, we can talk.”

For Hickle, this is only the beginning. They are also looking into clean water initiatives and sustainable agriculture projects. “There’s much we can do together, but as long as we’re disconnected we’ll never be able to get it done.”