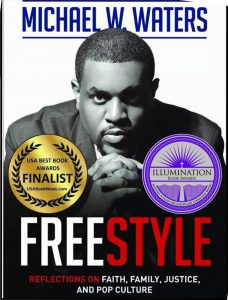 While leading a peace rally in Dallas, Texas, Rev. Michael Waters had to run for his life when gunfire broke out. He later visited the hospital where the majority of the wounded were being sent. Sharing this reality with surgeons who pronounced the first two officers dead and others at the hospital, he said, “I don‘t want a hope that does not acknowledge pain; I want one that looks pain in the eye and says even in the midst of pain I still believe.”

Waters, author of a book called FREESTYLE: Reflections on faith, family, justice and pop culture, led an afternoon workshop Friday that acknowledged the importance of bringing hope to a culture embattled with a never-ending cycle of violence. “Hip hop lyrics these days sound a lot like the prophets of the old testament commenting on the unfairness of suffering,” he shares. He reminded the audience of the importance of bringing a message of hope to the world. Among several stark realities mentioned:

“My experience in Dallas involved pain mounting on pain and sorrow on top of sorrow, but the question today is how can we remain hopeful and committed to God in the midst of mounting difficulties? I’m confident that no matter where you have come from geographically, if you serve in God’s church you are asking these same questions. How do we remain encouraged in light of violence, suffering, in light of situations and budget challenges and other difficulties in our churches? How can we stay encouraged to continue the fight?”

He shared the ray of hope he received through the Dallas tragedy. “I was able to find joy in the midst of sorrow when my mind was drawn to a picture of me on a hill, addressing the crowd. I had a tremendous vantage point in downtown Dallas with all races and colors and ages. I saw rich and poor, teachers and children and I saw this as a picture of the kingdom of God. In that picture I found comfort in realizing there were more of us committed to peace and justice than terror.

That’s where freestyle faith comes in,” he adds. “Begin to find hope and joy in creative ways. Even if you don’t have all you think you might need, you have enough to be creative and lift up the gifts you possess. What you do have is a voice and commitment to God. What the world needs is a new generation of leadership that committed to freestyle faith, who will faithfully face the pain in the world and commit to eradicate it every day. There’s far too much pain in the world for our churches to only be active one day a week. Those who are committed to freestyle faith must use it each and every day and in every circle of influence. Freestyle flows from the heart.”

Waters drew a parallel to hip-hop, saying, “Something happens when people get into a circle facing each other. It becomes a listening space where others bear witness to what is said. When we work together we can become one body with one spirit called to a glorious future. We are anointed to set captives free by the God of second chances.” 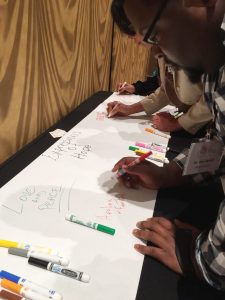 At the conclusion of the session workshop attendees gathered together with colored markers and mural paper to then experience and create  “Graffiti of Hope.” They were encouraged by Michael Waters to paint a new image of possibilities. Time is of the essence. We can’t wait for new church buildings, the church must be life support to resuscitate communities and help them rise again. Start now to live and say words that will help save a generation.”