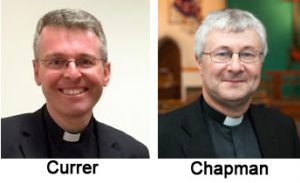 Rev. Dr. David Chapman (WMC Ecumenical Relationships Committee) and Rev Fr Anthony Currer (PCPCU) presented the latest report from the Joint Commission for Dialogue between the World Methodist Council and the Roman Catholic Church, entitled The Call to Holiness: From Glory to Glory (2016). It was referred to as the “Houston Report” because of the location of the 2016 WMC.

The presenters outlined the report that is a result of 5 years of dialogue and collaborative study involving leaders from both the World Methodist Conference and the Catholic Church. Once the report was made the audience was encouraged to respond to a couple of questions about their experience between the Methodist and the Catholic and what they thought could be done to bring the two faiths closer together.

Some Methodists expressed dismay at the reluctance of the Catholic Church to allow open communion that is the tradition in most Wesleyan practices. Others in the audience related their experience in working closely with local Catholic and Protestant churches particularly in smaller communities. It was suggested by Prof. Robert Gribben that visitors to Catholic churches could go the communion rail and ask for a prayer as a way to be present and respectfully participate. Everyone in the session agreed that continued dialogue is constructive and should continue.