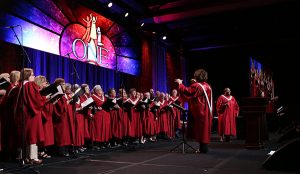 In keeping with the theme, One: God, Faith, People and Mission, the first gathering was titled Opening Worship: One God. The service was set before a beautiful background and filled with music that lifted the spirits of those who were weary from travel or hard work to get to the moment of worshipping together.

The Festival Choir of Christ Church UMC, Sugarland provided gathering music and the conference worship team continued to raise the audience to their feet singing songs common to everyone.

Greetings were offered by Peggy Larney of the Choctaw Nation of Oklahoma followed by introductions by Bishop Ivan Abrahams.

The group was welcomed by: 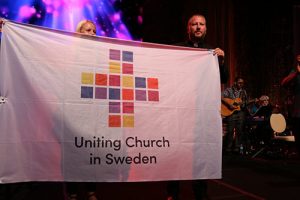 The processional of flags from across the world was set to the Charles Wesley hymn “O for a Thousand Tongues to Sing.”  It fit perfectly to highlight the expanse of the World Methodist Conference and all the voices that could be heard joining the singing.  An especially moving moment occurred when the audience members were asked to sing “How Great Thou Art” in their own language and the voices melded beautifully. 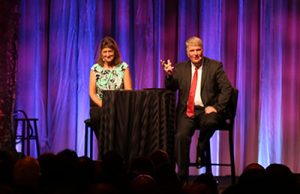 The topic of nature and God’s magnificent creation continued with a performance led by a group from the Iglesia Metodista del Peru. The message was to restore what man has done to God’s beautiful work.