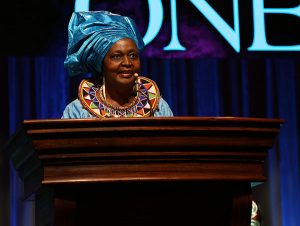 Rev. Dr. Grace Imathiu of Kenya led The Thursday morning Bible Study. Dr. Imathiu is an in-demand preacher and Bible study teacher who has preached and taught on six continents. Before she began her lesson on the “Parable of the Prodigal Son,” she shared a bit of her history with the World Methodist Conference. Her parents had each had profound experiences in at previous WMC meetings to the point that her family began to refer to the WMC gatherings as “dangerous places.”

The Bible study was of Luke 15. Eight readers joined Grace; each read a section of the text in their own language. Audience members were asked to stand as their language was spoken: German, Yoruba, Hindi, Spanish, Rumanian, Swahili, English and Kimeru.

Grace shared a poem from her friend who lamented the practice of labeling works with a title because the titles can limit our understanding of a piece of poetry, prose or art. Grace suggested the title, Parable of the Prodigal Son, leads to misinterpretation.

She declares the story is not about the son but about the father. Jesus is painting a picture of God for us: