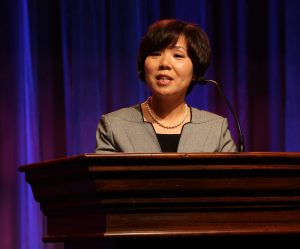 Dr. Yoo described her excitement of responding to her call, completing seminary only to learn that Korea did not ordain women at that time. It was not until 1989 that women were allowed ordination. She has returned to Seoul, South Korea and teaches Old Testament at the Methodist Theological University there. Dr. Yoo shared that she read the Bible as one who “does not belong.” Understandably, that perspective creates openness to the Scripture that is calling us to be one with God, to belong as a child of God.

In reviewing I Kings 3:16-28, Dr. Yoo challenged the audience to open their minds to explore the ambiguities of the text. Those ambiguities raise questions that may have not been considered before by many attendees.

Today, we need greater wisdom, wisdom that will allow us to live together in support of each other.